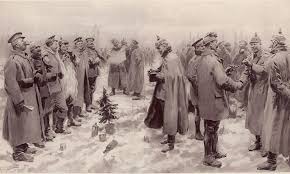 When we met him last week on our way to the line.
Now the soldiers he smiled at are most of 'em dead,
And we're cursing his staff – (those) incompetent swine."
– An excerpt from Siegfried Sassoon's poem "The General", commenting on the standard use of World War I frontline soldiers as "cannon fodder"

"…the ones who call the shots (in war) won't be among the dead and lame,
And on each end of the rifle we're the same" — John McCutcheon, from his powerful antiwar (and therefore censored-out) song "Christmas in the Trenches"

"The first casualty, when war comes, is truth". — Hiram Johnson (1866-1945) – a Progressive Republican US Senator from California, who died on Aug. 6, 1945, the day the United States dropped an atomic bomb on Hiroshima.

In World War I, as happens to be true in most wars involving Christian soldiers, the Christian church leadership joined in the patriotic fervor with very un-Christ-like, nationalistic and racial/religious superiority stances.