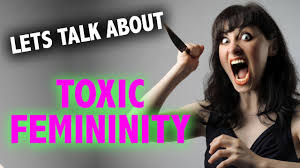 So, why does no one talk about it? Well, mostly because the left believes that "designated victims"™ are sacred and must never be called on their own bullshit, no matter how smelly. Hence also the bizarre idea of racial "privilege" that tells you holocaust survivors should be attacked for "white privilege" but the Obama girls raised as the creme de la creme, and never facing a day of privation in their lives don't have any privilege and are victims.

But there's also other stuff going into it. To an extent—to the extent that historically for biological reasons men dominated public life—the fact that no one talks about the bad side of female modes of being in society is the result of patriarchy.

Men are ridiculously, idiotically, insanely blinkered about women. They don't really see women as they see other men, but through rosy glasses as much better than men. The "oh so smart" former president with the depth of a rain puddle in Colorado told us that women are so much better than men and that the world would be better under women. Which means he's basically a bog standard male who has never given the matter a thought, and is going on what "everybody knows." (It occurs to me this man, if he'd been born to an ultra conservative Arab family in one of the ultra conservative Muslim countries would also be telling us that women's hair emits seductive rays. He's a suit that speaks. Or an empty chair, if you prefer.)