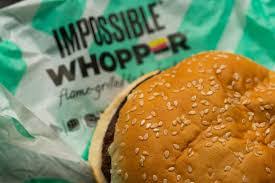 The Washington Post published an entire article denying a claim by a veterinarian that Burger King's new estrogen-packed vegan 'Impossible Whopper' could make men grow breasts if they eat too many.

According to James Stangle, a doctor of veterinary medicine in South Dakota, the soy-based Impossible Whopper contains 18 million times more estrogen than the original beef Whopper.

That works out at 44 milligrams of estrogen in the vegan burger compared to just 2.5 nanograms in the original beef Whopper.

"Just six glasses of soy milk per day has enough estrogen to grow boobs on a male," wrote Stangle.

The Post tried to debunk his claims by pointing out that Tri-State Livestock News, where his article was published, is "a trade publication for the livestock industry" and represents cattle ranchers who have "declared war" on Impossible Foods and Beyond Meat, two of the biggest companies behind plant-based meat substitutes.

The science on whether substantial soy consumption feminizes men is still disputed, although given what many soy enthusiasts look and sound like, there appears to be a strong correlation.

A Texas man who complained of sore, enlarged breasts and a decreased libido was later found to have estrogen levels eight times higher than normal, a result explained by his over-consumption of soy milk.

85,000 Lawsuits Against Monsanto and Bayer for Illness and Death from Roundup...