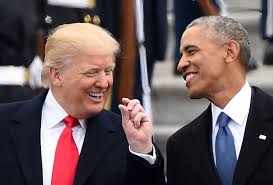 President Trump retweeted a conspiracy theory about Ukraine on the heels of posting a tweet that links to an article naming the alleged whistleblower, who kickstarted the Ukraine-related impeachment inquiry.

'And the media was silent about it,' Kirk claimed.

Kirk has sent out identical tweets before, with Politifact labeling it 'mostly false' as there's 'no evidence' that Obama asked Ukraine to investigate Paul Manafort, Trump's former campaign chairman.

Manafort is serving a 7.5 year prison term for charges brought by Special Counsel Robert Mueller's probe including violating federal lobbying laws by concealing money he made from pro-Russia political figures in Ukraine.

Trump was already taking heat for retweeting a post from his reelection campaign account that read: 'It's pretty simple. The CIA 'whistleblower' is not a real whistleblower.'