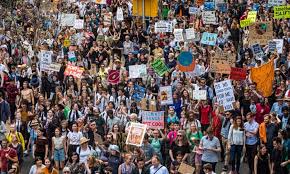 Students in a Virginia school district will soon be allowed to take a day off in order to participate in protests in a novel new policy.

The school board of Fairfax County has confirmed it will formerly allow the children to skip a day of class in order to exercise their civil rights.

It comes amid a wave of student activism across the country which has seen thousands of young people take to the streets to call for change, from stricter gun laws to action on climate change.

At 188,000 students, Fairfax County Public Schools is one of the country's biggest school districts and the largest in Virginia.

'The school board felt that this was something that could be formalized and wanted to put into writing. There were many students who were engaged and have been engaged and it was decided that it was time to go ahead and put into place,' Caldwell told local media.