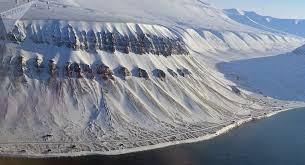 The Norwegian government has funded a covert "doomsday vault" originally proposed by US scientist Cary Fowler and meant to serve as a modern "Noah's Ark" should the end of the world come along, Australia's 60 Minutes' Charles Wooley reported as he travelled to the Arctic Circle wilderness to shoot a documentary there.

The Spitsbergen "vault", which is in actual fact a £3.7million bank that shelters an extensive variety of plant seeds that a duplicate, or so-called "spare" samples, of seeds held in gene banks around the world is to ensure that the precious rare samples will by no means be lost in the event of a regional or even global crisis.

"In the frozen Arctic wilderness of the Norwegian island of Svalbard, not far from the North Pole, there's a presence looking as alien as a pyramid on the Moon", Wooley told the TV audience, continuing descriptively:

"It towers 10 metres out of the ground and slopes backwards like a fallen obelisk", he could be heard saying, bringing up the frozen seeds of "90 percent of the world's crops" that are carefully stored in the vault, serving as a "potential insurance policy against the potential calamities of war, terrorism, fire or flood".