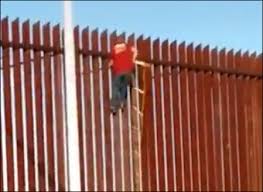 A migrant scaled a new 30-foot section of the border wall with relative ease recently.

The photo spoke Spanish throughout the video, which shows the man scaling the 30-foot height in mere seconds, only to get to the top, intentionally drop the ladder to the ground, and remain on the Mexican side. The location is unknown.

It is not clear if he was ever successful breaching the border. He made it to the top in just 23 seconds.

A similar incident occurred earlier this month, according to video published by Mediaite.

We actually built prototypes and we have, I guess you could say, world-class mountain climbers. We got climbers. We had 20 mountain climbers. That's all they do; they love to climb mountains. They can have it. Me, I don't want to climb mountains. But they're very good. And some of them were champions. And we gave them different prototypes of walls, and this was the one that was hardest to climb.