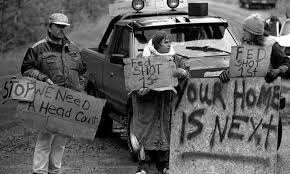 The Clintons were in power with "Bloody Janet" Reno as Attorney General. Even the Home-Schooling movement was under fire by the Clinton cabal. We were told it "took a village' to raise our children–but their village was full of unpatriotic idiots.

Democrat Ann Richards (responsible for the illegal military involvement at the Waco massacre) was Governor of Texas, and we had almost no gun rights. You couldn't even legally carry a pistol in your vehicle unless you could establish that you were "traveling" and staying away from home overnight (keep a suitcase in the trunk). By 1996 the militia movement was in full swing across the nation, with a bunch of poorly-trained men and women in camo, faced off against well-armed federal agents, law enforcement and the National guard. To say it was a powder keg would be an understatement. To make matters even more dangerous, the feds were using undercover operatives to stir up and instigate violence in militias.

Today when I see people write about how close to a revolution we are, I understand the sentiment, but you ain't seen nothing yet! Wait until you decide to group together, armed and wearing some kind of military uniform, making loud anti-government statements, and planning your resistance! Lots of interesting things will follow!