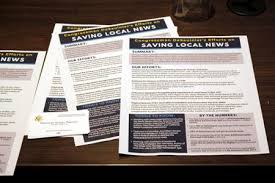 What they no longer have is a thriving landscape of local daily newspapers.

Gone is the Oakland Tribune, the Contra Costa Times, The Daily Review of Hayward, The Argus of Fremont and the Tri-Valley Herald, among others. All had tens of thousands of readers during their heyday and served communities populous enough to be among the largest cities in many other states.

Ownership changes and consolidations have left the region known as the East Bay with just a single daily newspaper. The East Bay Times, based in Walnut Creek, attempts to cover a region nearly the size of Delaware with a fraction of the staff of the former dailies.

The growing number of places across the country with dwindling or no local news options has been associated with mostly rural and lower-income areas, places that have little resilience to counter the trend among readers and advertisers to go online. But the East Bay — among the wealthiest and highest educated regions in the country — shows that no place is immune to the struggles of the traditional news industry.