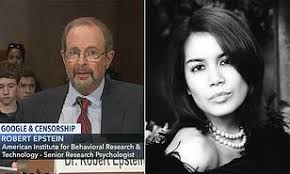 Psychology professor, Robert Epstein, 66, shared in a heartbreaking tweet announcing that his wife, Misti Dawn Vaughn, died after her vehicle spun out of control along a slippery road in California and into the path of a tractor-trailer.

'I was supposed to die in your arms some day, but a slippery road has ruined everything. You were not just my love, you were my greatest adventure.'

Misti, 29, reportedly lost control over her Ford Ranger just after 8am Monday morning.

According to the San Diego Union-Tribune, she was driving along rain-slick Interstate 15 in Escondido when the accident occurred.

When her truck spun out of control it crossed into the path of an oncoming big rig that was hauling two dump trailers.