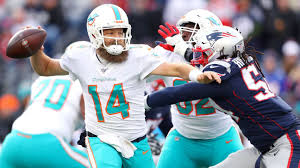 Blotchy eyes and whispers were all that remained.

Most doors had been shuttered. Most players had gone. Inside the Patriots locker room Sunday, all signs pointed to closure.

The few Pats who had stayed spoke of hope during their interviews, attempting to pierce the atmosphere of dejection with a bit of belief. They noted their loss, a 27-24 heart-breaker to the Dolphins, hadn't actually ended their season, even if every player had spent all week calling it a playoff game. The Patriots would put the defeat behind them and return to work, just as they'd been instructed to minutes earlier by their coach, Bill Belichick.

Nonetheless, this loss hung in the air. It stung.

It cut to the core of concern surrounding this season. The Pats finished 12-4, but only .500 over the second and more difficult half of their schedule. Perhaps, for once, they weren't worthy of lifting the Lombardi.

Failing to clinch a first-round playoff bye quantified that concern. The Pats slipped to the No. 3 seed in the AFC, having lost a head-to-head tiebreaker with the Chiefs who finished with the same record. The Pats' Wild Card game against the Tennessee Titans next weekend will be the franchise's first in 10 years.