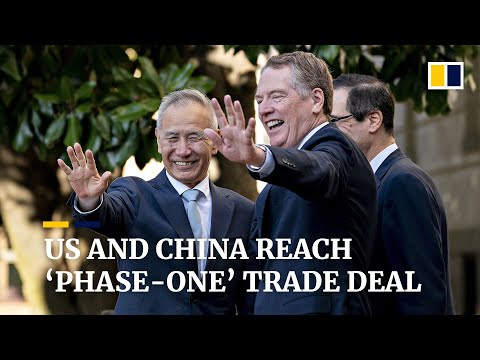 The Phase One trade deal which was "concluded" on Oct 11 may finally be getting signed. According to SCMP, China's Vice-Premier Liu He and chief trade negotiator will lead a delegation to Washington on Saturday, where he is expected to sign the phase one deal that will roll back some current tariffs in exchange for a "best effort" by Beijing to import more US ag products.

"Washington has sent an invitation and Beijing has accepted it," said the anonymous SCMP source, who added that the Chinese delegation is expected to stay "a few days" in the US until the middle of next week, even though neither side has officially confirmed the trip yet.

The signing of a phase one deal during Liu's trip would mark a point of truce in the bitter trade war between the world's two biggest economies, one that is expected to boost global markets and brighten increasingly gloomy outlooks for economic growth. That said, it was back in May when trade talks collapsed just hours before the signing ceremony was set to take place, so one never knows...

US trade representative Robert Lighthizer said on December 13 that officials from both countries would sign the phase one trade deal "in the first week of January" and it now appears that will be the first weekend of the year, although the Chinese side has never confirmed the date of the signing, and there is appears to be no indication that Trump and Xi will meet in the coming weeks.

Meanwhile, as SCMP also reports, Cui Tiankai, China's ambassador to the United States, said in an interview with state broadcaster CGTN last weekend that Beijing will live up to its trade deal commitments. "I think we have full confidence in our negotiators. So let the two teams do their job," Cui said. "And still they are under the guidance of the two presidents."