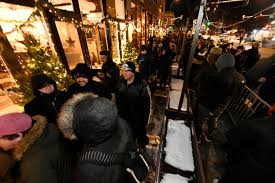 On New Year's Day, Illinois began its first legal sales of recreational marijuana to the delight of many, some of whom began lining up hours early at dispensaries.

Hundreds of people formed queues at the nearly three dozen dispensaries with a license to sell recreational cannabis.

Jackie Ryan, of Forest Park, was the first person in the state purchase recreational pot when bought marijuana products from employee Brea Mooney at Sunnyside dispensary in Chicago at 6am.

'It's better than Christmas when I got my Barbie dream house,' Ryan told reporters and photographers.

'This is great. This is really exciting. This is wonderful.'

Illinois already allowed medical marijuana, but became the 11th state to allow its use and sale for recreational purposes in May 2019.

Illinoisans Are Overwhelmed By "Shadow Mortgage" Of Pension Debts