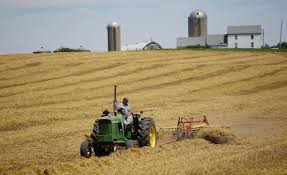 The money flowed to farmers like Robert Henry. When I visited in early July, many of his fields near New Madrid, Mo., had been flooded for months, preventing him from working in them. The soybeans that he did manage to grow had fallen in value; China wasn't buying them, in retaliation for the Trump administration's tariffs.

That's when the government stepped in. Some of the aid came from long-familiar programs. Government-subsidized crop insurance covered some of the losses from flooding. Other payments were unprecedented. The U.S. Department of Agriculture simply sent him a check to compensate him for the low prices resulting from the trade war.

" 'Trump money' is what we call it," Henry said. "It helped a lot. And it's my understanding, they're going to do it again."

Indeed, a few weeks later, the USDA announced another $16 billion in trade-related aid to farmers. It came on top of the previous year's $12 billion package, for a grand total of $28 billion in two years. About $19 billion of that money had been paid out by the end of 2019, and the rest will be paid in 2020.