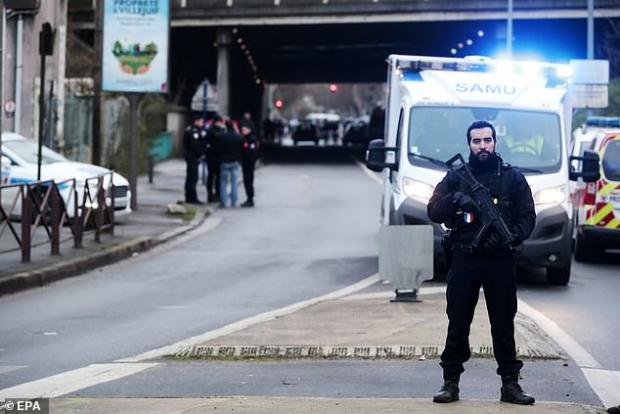 Witnesses told local media the attacker was yelling 'Allahu Akbar' as he launched the assault in the Hautes-Bruyères park in the Villejuif suburb shortly after 2pm on Friday.

Police said the man appeared to be wearing an explosive vest and had made off towards a Carrefour supermarket just under a mile away where he was 'neutralised,' shot several times and died at the scene.

Mayor of Villejuif Franck Le Bohellec told Le Parisen the dead man was a 56-year-old who 'was walking with his wife when the attacker approached, he wanted to protect his wife and it was he who suffered the stab wound'.

The knifeman has been identified by French media as Nathan C. by his card details which say he was born in 1997 in Lilas, a commune in the eastern suburbs of Paris.

He was not being tracked as a religious zealot, although 'elements linked to religion' that 'suggested he had converted to Islam' were found among his personal effects, the local prosecutor's office said.