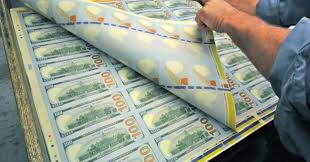 As a reminder, the Fed is prohibited from directly purchasing Treasurys at auction, as that is considered "monetization" and directly funding the US deficit, not to mention is tantamount to "Helicopter Money" and is frowned upon by Congress and established economists. However, insert a brief, 3-days interval between issuance and purchase... and suddenly nobody minds. As we summarized:

"for those saying the US may soon unleash helicopter money, and/or MMT, we have some 'news': helicopter money is already here, and the Fed is now actively monetizing debt the Treasury sold just days earlier using Dealers as a conduit... a "conduit" which is generously rewarded by the Fed's market desk with its marked up purchase price. In other words, the Fed is already conducting Helicopter Money (and MMT) in all but name. As shown above, the Fed monetized T-Bills that were issued just three days earlier - and just because it is circumventing the one hurdle that prevents it from directly purchasing securities sold outright by the Treasury, the Fed is providing the Dealers that made this legal debt circle-jerk possible with millions in profits, even as the outcome is identical if merely offset by a few days"

So fast forward to today, when the Fed conducted its latest T-Bill POMO in which, as has been the case since early October, the NY Fed's market desk purchased the maximum allowed in Bills, some $7.5 billion, out of $21.9 billion in submissions. What was far more notable, were the actual CUSIPs that were accepted by the Fed for purchase. And here, once again, we find two particular issues that stick out: UB3 (due July 2, 2020) which was the most active CUSIP, with $5.245BN purchased by the Fed, and TM1 (due April 2, 2020) of which $1.2BN was accepted.