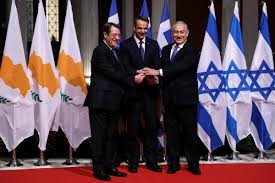 The three signed the deal on Thursday to build a 1,900 km (1,180 mile) subsea pipeline to transport supplies from the rapidly advancing gas fields of the eastern Mediterranean to Europe.

A massive undertaking to supply energy-hungry Europe, the East Med pipeline project was first proposed by Greek energy minister Yannis Maniatis in 2014, and has since been hailed as "the longest and deepest gas pipeline in the world". At an initial estimated cost of $6-7 billion, it will be financed by "private companies and institutional lenders," according to prior Israeli Energy Ministry statements.

The underground, sub-sea pipeline is proposed to connect Israel, via Cyprus, to Greece and Italy, in a massive construction project estimated to take five or six years to complete, and which once online is expected initially pump 10 billion cubic meters of gas per year.

The energy ministers of Greece, Israel and Cyprus - Kostis Hatzidakis, Yuval Steinitz and Yiorgos Lakkotrypis - attended a signing ceremony in Athens which finalized the project's moving forward, according to Reuters.

Japan Confirms 88 More Cases Aboard 'Diamond Princess', Bringing Total To 542 One Day Before