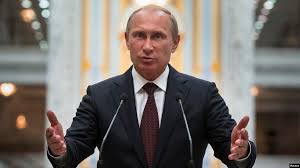 He dealt successfully with American/Israeli aggression against South Ossetia and against Ukraine, incorporating at Crimea's request the Russian province back into Mother Russia.  He has tolerated endless insults and provocations from Washington and its empire without responding in kind.  He is conciliatory and a peacemaker from a position of strength.

He knows that the American empire based as it is on arrogance and lies is failing economically, socially, politically, and militarily.  He understands that war serves no Russian interest.

Washington's murder of Qasem Soleimani, a great Iranian leader, indeed, one of the rare leaders in world history, has dimmed Trump's leadership and placed the limelight on Putin. The stage is set for Putin and Russia to assume the leadership of the world.

Washington's murder of Soleimani is a criminal act that could start World War 3 just as the Serbian murder of the Austrian Archduke set World War 1 in motion.  Only Putin and Russia with China's help can stop this war that Washington has set in motion.