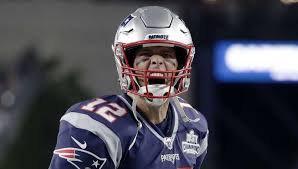 The future of the 42-year-old quarterback, and whether he will return to New England, was the hot-button topic after the Patriots had their earliest postseason exit since a 33-14 wild-card loss to the Baltimore Ravens on Jan. 10, 2010.

Since Brady is a free agent after the season for the first time in his career, and the Patriots cannot assign him the franchise tag, it sets up a scenario that has never been in play during Brady's 20-year career: the possibility this was his final game with the franchise.

Asked after the game if he wanted to return, Brady said, "I love the Patriots. It's the greatest organization. Playing for Mr. [Robert] Kraft all these years, and for Coach [Bill] Belichick, there's nobody who's had a better career, I would say, than me -- just being with them. So I'm very blessed.

"I don't know what the future looks like, so I'm not going to predict it."

The Patriots became the third team to lose in the wild-card round after starting the season at least 8-0, joining the 2015 Cincinnati Bengals and 2013 Kansas City Chiefs.

The sixth-seeded Titans, led by running back Derrick Henry, who rushed for 182 yards on 34 carries with one touchdown, now visit the No. 1 Ravens in the AFC divisional round.