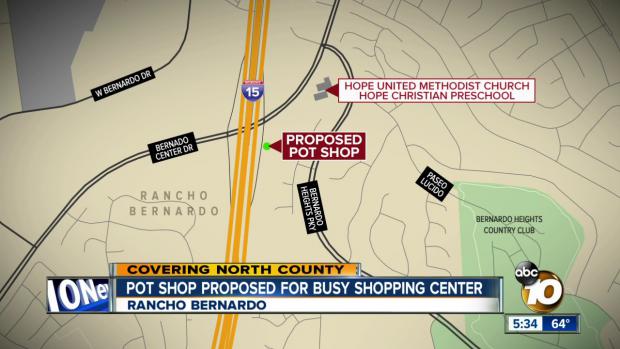 SAN DIEGO — Local controversy over marijuana dispensaries opening near churches took a new turn recently, when a man proposing a dispensary in Rancho Bernardo built a large fence on the property to create a longer walking distance between the business and the church -- hoping to allow the dispensary under city rules.

Dispensaries can't open within 1,000 feet of churches, parks, schools and other "sensitive uses" under city rules. But the 1,000 feet is measured by "path of travel" instead of a straight line, so the fence could make a key difference.

City leaders shifted from straight-line measurements to path-of-travel in 2016 in cases where a freeway or some other barrier impeded direct physical access to the proposed dispensary.

Because it's not clear whether the fence qualifies as such a barrier under the city's arguably vague revised standard, city officials are proposing some additional revisions for greater clarity.

Marijuana industry leaders support the proposed revisions, but leaders of the church in Rancho Bernardo – Hope United Methodist – and other residents say the changes would prioritize marijuana profits over public safety.

Medical Marijuana: What They Don't Want You Know

How depression and breast cancer are linked