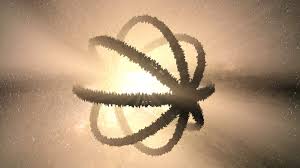 Our planet is sometimes referred to as "Spaceship Earth," a nickname meant to emphasize our role as stewards of a finite and fragile home world. Now, a physicist has taken this metaphor to the next level with new research into giant hypothetical machines with the power to move full star systems.

Matt Caplan, an astrophysicist at Illinois State University, published a recent paper in the journal Acta Astronautica, which was developed in collaboration with Kurzgesagt, a science education YouTube channel that dramatized Caplan's work in an animated video.

The paper outlines two "stellar engine" concepts. The first is a giant solar sail that builds on the "Shkadov thruster," a design proposed by Russian physicist Leonid Shkadov in the 1980s. The second is a complex thermonuclear reactor powered by a Dyson sphere, which is a hypothetical type of massive power plant that feeds off of stars.

These engines could harness the energy of stars for propulsion, enabling them to steer entire stellar systems away from catastrophic hazards like supernovae, or toward promising opportunities such as potentially habitable systems.

While stellar engine concepts have been around for several decades, Caplan set out to constrain the parameters of such machines, including their speed, maneuverability, and the type of detectable signals they might produce.

Aside from rough sketches and conjectures, nobody had yet made the effort to "do the math" behind these star-moving technologies, Caplan said in a phone call. "That's the new result of the paper," he added. "What exactly is possible if you have a Dyson sphere and you want to use it to drive a jet to push a star around?"