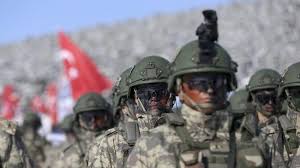 Erdogan's troop deployment announcement comes days after Turkey's government approved operations in Libya after it received a request for military support by GNA.

"Right now, we will have different units serving as a combatant force," he said without giving much detail about the number of troops and the type of weapons that will be used to support GNA.

Erdogan said the object of the new deployment is not about combat operations but instead to support the government and prevent a humanitarian crisis: "Our soldiers' duty there is coordination. They will develop the operation center there. Our soldiers are gradually going right now."

Media reports have alleged that the Trump administration was mulling an ambitious plan to divide Libya into three areas based on three old Ottoman provinces: Cyrenaica in the east, Tripolitania in the north-west and Fezzan in the south-west, according to Sputnik News. And who better to implement this split than the country which once was the Ottoman Empire...