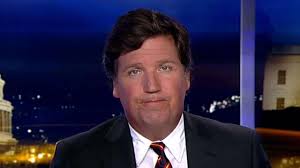 From The Daily Caller:

Tucker noted as "striking" that people are willing to accept the notion that Iran was "about to" strike U.S. cities with acts of sabotage.

"Just the other day, our intel agencies were considered politically tainted and suspect," he said.

"Certainly on this show they are, were, and will be for quite some time. These are the people who invented excuses to spy on the Trump campaign, purely because they didn't like Donald Trump's foreign policy views, and then pretended he was a Russian agent in order to keep him from governing. Remember that? Russiagate? Our friends in the intel community did that. And by the way, they also lied about Iraq's weapons of mass destruction back in 2002, and by doing that they got us into an utterly pointless war that dramatically weakened our country. The people now pushing conflict with Iran did that."

The Fox News host contended that Americans "were denouncing these people as the deep state" only "20 minutes ago."

"But now, for some reason, we do seem to trust them, implicitly and completely," Carlson continued.

"In fact, we believe whatever they tell us, no matter how outlandish. 'Iran did 9-11!' they're telling us. Oh, ok. Didn't know that. Fifteen of the nineteen hijackers were from Sunni Saudi Arabia. None were from Shia Iran. But if you say so, Mr. Unnamed CIA Official. Happy to send my kid to the Middle East a week after Christmas on the basis of your anonymous and unverified leak to the New York Times. You've earned my trust through years of lying to me. That appears to be our position now."

"Now maybe this will all turn out all right," he concluded. "We're certainly praying for it. We love this country. But in the meantime, pardon the skepticism."

As I reported last week, Media Matters' Matthew Gertz accused Tucker Carlson of anti-Semitism for saying the same "people demanding action against Iran … are the very same ones demanding that you ignore the invasion of America now in progress from the south."

Also, it's Tucker Carlson, so the argument against killing Soleimani involves more-or-less explicitly bigotry. "The people demanding action against Iran tonight... are the very same ones demanding that you ignore the invasion of America now in progress from the south." pic.twitter.com/Db1yIWynKd