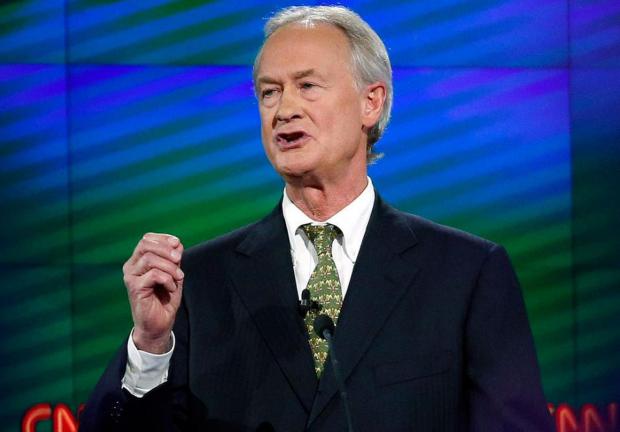 Lincoln Chafee, who served as Rhode Island's Republican Senator from 1999 to 2007 (after serving as a Republican mayor in the highly Democratic city of Warwick for the previous six years), served as governor of Rhode Island from 2011 to 2015 as an independent, and ran for president in the 2016 cycle as a Democrat, on Wednesday will formally announce his intention to seek the Libertarian presidential nomination at an event at the National Press Club in Washington, D.C.

Chafee's campaign website says he intends to "Protect Our Freedoms" and "Tell The Truth" and promises that under a President Chafee we'll see "No More Wars. No More Reckless Spending."

Chafee officially joined the Libertarian Party (L.P.) back in July, but he says in a phone interview today that he hadn't been planning a presidential run at first since he "expected other long-term Libertarians with elective experience to continue to want to be involved, Gov. [Gary] Johnson specifically." (Johnson, a former Republican governor of New Mexico, was the L.P.'s presidential candidate in 2012 and 2016.)

That didn't happen, and Chafee feels he's gotten "positive feedback" from meeting with Libertarians in "Miami, New Hampshire, Denver, and Rhode Island." His "anti-war, anti-deficit, strongly protective of civil liberties" message, particularly "after the events of last week in the Middle East" culminated in him thinking it was a good idea to run for president.

Chafee is aware that a significant portion of the L.P.'s delegate base, who will choose their standard-bearer at a May convention in Austin, Texas, are uncomfortable with perceived carpetbaggers attempting to secure the party's nomination without putting in the work. In a phone interview this morning, the L.P.'s national chair Nicholas Sarwark estimates the percentage likely to find Chafee's major party background a detriment, not a plus, could be as large as 25 percent.

But Chafee says his "30 year record of holding local, state, and federal offices" shows a politician who, at least a "lot of" the time, "aligns with the Libertarian philosophy" though he confesses "it doesn't always. Traveling around, not too many Libertarians I've met all agree with each other," he notes, but stresses that "on the big issues I've been very consistently anti-war, anti-deficit, [and] strongly in favor of civil liberties."

As far as conflicts that might be ahead with Libertarian partisans, Chafee says he's "a good listener" and also anticipates being willing to debate if called upon with his fellow contenders for the Libertarian presidential nomination. He doesn't think 100 percent agreement with every aspect of a party platform is something normally expected of any candidate with any party, but again thinks he should shine with Libertarians because "I am enthusiastically absolutely dedicated to not getting us into these quagmires overseas and ending foreign entanglements" and trying to curb the "$22.6 trillion debt." Those are the particular issues he wants to make central to his campaign, both for the nomination and, if he wins it, in the general election.

As far as facing Trump, should it come to that, Chafee says his career has made him skilled in "brass knuckle" political fighting.

One of the issues he's been dinged for in the past by libertarians is gun control, but Chafee says he's come to think "the reason there is more advocacy for strong Second Amendment protections is distrust of our government, and that distrust is legitimate."