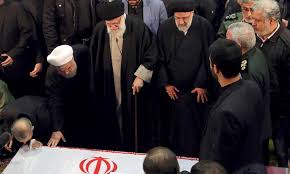 The bombshell facts were delivered by caretaker Iraqi Prime Minister Adil Abdul-Mahdi, during an extraordinary, historic parliamentary session in Baghdad on Sunday.

Maj. Gen. Qasem Soleimani had flown into Baghdad on a normal carrier flight, carrying a diplomatic passport. He had been sent by Tehran to deliver, in person, a reply to a message from Riyadh on de-escalation across the Middle East. Those negotiations had been requested by the Trump administration.

So Baghdad was officially mediating between Tehran and Riyadh, at the behest of Trump. And Soleimani was a messenger. Adil Abdul-Mahdi was supposed to meet Soleimani at 8:30 am, Baghdad time, last Friday. But a few hours before the appointed time, Soleimani died as the object of a targeted assassination at Baghdad airport.

Let that sink in – for the annals of 21st century diplomacy. Once again: it does not matter whether the assassination order was issued by President Trump, the US Deep State or the usual suspects – or  when. After all, the Pentagon had Soleimani on its sights for a long time, but always refused to go for the final hit, fearing devastating consequences.