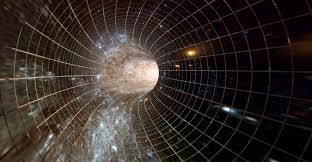 Time-traveling has been in our imaginations since we discovered what time is and how we move in it. Our comprehension so far is that we move in that  one dimension constantly, always forward, and that we don't really have a choice—unlike in the other three dimensions in which we live our lives.

Einstein's theory of special relativity always plays a crucial role when new theories of time traveling appear, and this is not an exception. This theory explains how time is not absolute, as we have believed, but rather, it depends on the speed at which an object is moving, and time can accelerate or decelerate depending on that.

The Twin Paradox explains how if there are two identical twins and one of them makes a journey into space in a really high-speed rocket, after he returns to Earth he will have aged less than the one that stayed on Earth. This is well accepted in the science community as a possible scenario if we ever get to reproduce this experiment. However, time travel is not possible, at least not so far.

While Mallet acknowledges that his theories and designs are unlikely to allow time travel in his lifetime, that's not stopping him from pursuing his dream and to meet his beloved father again; therefore, he has developed some scientific equations and principles upon which he says a time machine could be created.

Mallet was age 10 when his father suddenly died from a heart attack, that event changed the track of his life forever.