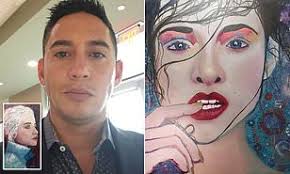 A North Carolina man says he awoke from a serious car accident with a traumatic brain injury and a surprising new ability.

In 2015, Scott Mele, 42, from Wilmington, was sitting in his vehicle at an intersection when he was a hit by a car going 70 miles an hour.

He survived but, during his recovery, he began suffering from anxiety and depression and didn't feel like himself anymore.

It wasn't until months later, while browsing through a craft store with his kids, that Mele decided to buy painting supplies, WECT reported.

The former car salesman discovered that not only did he like painting - he was really good at it, despite never having picked up a paintbrush before.

Mele is one of just a few dozen people in the world with a rare medical condition who've awoken with newfound talents after suffering severe head trauma.