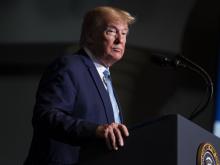 Strikes are not thought to have killed any U.S. or Iraqi personnel, though extent of damage is being assessed

Ayatollah Khamenei said U.S. was given a 'slap' but strikes alone are 'not enough' and wants troops kicked out

There are still fears for U.S. troops after Iran-backed militias in Iraq threatened to carry out their own strikes

President Donald Trump will address the world at 11:00 from the White House

Timing will fall between Muslims' afternoon and evening prayers in Tehran

Donald Trump will address the world on Wednesday morning from the White House about the growing crisis in Iran, speaking from the Grand Foyer adjacent to the East Room at 11:00 a.m.

The high-stakes address will come just hours after Iran launched what it promised would be a 'crushing revenge' strike against the U.S. over the death of General Qassem Soleimani but succeeded only in damaging two airbases in neighboring Iraq.

Iranians will tune in to hear their mortal enemy in between afternoon and evening prayers. The Maghrib prayer time on Wednesday is 5:07 p.m. and Isha prayers will be at 6:32 p.m.

Because Iran spans two time zones, its leaders split the difference—putting Tehran 8-1/2 hours ahead of Washington and Trump's speech at 7:30 in the evening. Devout Muslims living under Iran's Islamist regime observe their faith's mandate to pray five times each day on a schedule governed by the movement of the sun across the sky.

The Islamic Revolutionary Guard Corps fired 22 ballistic missiles at the Ain al-Asad airbase in western Iraq and Erbil International airport in the north in the early hours of Wednesday, but failed to kill a single US or Iraqi solider.

Ayatollah Ali Khamenei, speaking on Iranian TV shortly after the missiles were launched, described the strikes as 'a slap' and said they 'are not sufficient (for revenge)' while vowing further action to kick US troops out of the region.

But foreign minister Mohammad Javad Zarif said the attack was now 'concluded,' praising Iran's 'proportionate' response and adding: 'We do not seek escalation or war.'

Trump tweeted late Tuesday to say 'so far so good' as American forces assessed the damage and casualties.

Iranian television had tried to claim that 80 'American terrorists' were killed, but that figure was quickly rubbished by Iraqi and US officials.

Images showed several missiles had either failed to explode on impact or else missed their targets.  The remains of one was found near the town of Duhok, some 70 miles from Erbil air base, which was the intended target.

President Donald Trump will address the world at 11:00 from the White House about the growing crisis in Iran