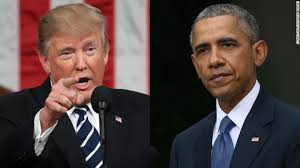 He blamed the Obama administration for unfreezing $150 billion and delivering $1.5 billion in cash to jump-start a nuclear nonproliferation deal that has since fallen apart

'As long as I am president of the United States, Iran will never be be allowed have a nuclear weapon,' he vowed, even before saying 'Good morning'

'Our missiles are big, powerful, accurate, lethal and fast,' he said, sending a warning in nearly the same breath as an olive branch

'Under construction are many hypersonic missiles,' he warned, standing amid a tableau of stern-faced military leaders

Strikes are not thought to have killed any U.S. or Iraqi personnel, though extent of damage is being assessed

Ayatollah Khamenei said U.S. was given a 'slap' but strikes alone are 'not enough' and wants troops kicked out

There are still fears for U.S. troops after Iran-backed militias in Iraq threatened to carry out their own strikes

Huawei 'builds back doors into its hardware to secretly pilfer mobile network data'...