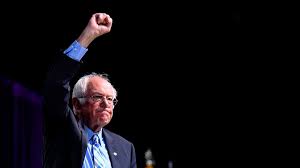 A new poll shows US Senator Bernie Sanders has taken the lead among Democratic presidential candidates in the important early-voting state of Iowa - although his three biggest rivals are right behind him.

The poll, released Friday, revealed that there is a clear top tier of four candidates competing in Iowa.

Sanders received support from 20 per cent of respondents in the poll, with the next three candidates - US Senator Elizabeth Warren, former South Bend, Indiana, Mayor Pete Buttigieg and former Vice President Joe Biden - in a statistical tie behind him in the poll conducted by Iowa polling firm Selzer & Co and released by the state's largest newspaper, the Des Moines Register.

The poll found Warren at 17 per cent, Buttigieg at 16 per cent and Biden at 15 per cent.

Buttigieg experienced the biggest drop in support compared to the same poll conducted in November, losing nine percentage points. He had previously had a strong lead in the poll with 25 per cent, nine points ahead of Warren, who was then his closest competitor.

The Clinton Machine Will Do Anything To Stop Bernie Sanders