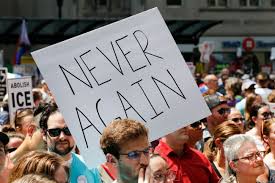 Forget all of the mindless blather about "hate". Hate is a ghost. It's an immortal ghost. Trying to fight hate is like trying to nail Jell-o to a wall. After all of the empty, futile moaning and groaning on TV, what we have here is a practical problem that can only be solved by practical means.

I have been called a widely-recognized expert on the ethics of self-defense. I am a freelance writer by trade. I am not religious at all. Yet I was chosen to write for a Jewish civil rights organization about twenty years ago. I wrote two books for them and hundreds of essays like this one. In the end, they were generous enough to make me an honorary Life Member, something I treasure as much as my hard-earned rank of Eagle in the Boy Scouts of America.

That organization was, and remains today, Jews for the Preservation of Firearms Ownership. It was the conviction of their illustrious founder and leader, the late, great Aaron Zelman, that if Jews had possessed personal weapons in Germany in the 1930s, and refused to give them up, there would never have been a Nazi Holocaust. Many a hand-wringing "liberal" idiot—for example, the thick-headed, myopic leadership of the Anti-Defamation League, which might be more accurately labeled "We Who Refuse To Learn From History"—argued with Aaron about that, but I agreed with him wholeheartedly, having written the first novel that I know of—1980's The Probability Broach—advocating that everybody in society should be armed. I was more than happy to help him spread the message any way I could.