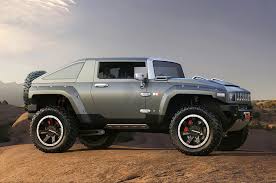 The Detroit automaker is going to be buying Super Bowl airtime to debut the Hummer as an all-electric pickup, carrying on the model's lineage that was discontinued about a decade ago. GM has even signed LeBron James to appear in the commercial, which will air on February 2, according to CNBC.

The vehicle is going to be sold under the GMC brand, instead of its own standalone brand. It is expected to go on sale by late 2021 or early 2022 and will likely be a direct competitor to Tesla's Cybertruck, should the Cybertruck actually wind up being manufactured at some point.

And the Hummer looks badass.

Making the Hummer name - which used to be synonymous with gas guzzling - an EV was a big step. Karl Brauer, executive publisher of Cox Automotive called it a "perfect marriage".

The move comes at a time when pickups and SUVs continue to dominate in popularity with American auto buyers, despite the overall industry recession.