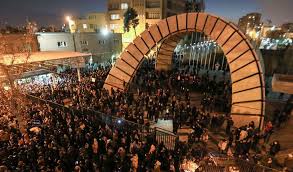 Additionally, it appears that the British ambassador in Tehran, Rob Macaire, was arrested shortly after photographing the protests. Iranian state sources are alleging he was helping to "organize" and incite the protests.

The UK ambassador to Iran Rob Macaire has been arrested during the protests in Tehran on Saturday, Iran's semi-official Tasnim news agency reported.

Macaire was present during the Saturday protests in front of Tehran's Amir Kabir University and was arrested then, Tasnim's report said.

Though he's reportedly already been released, the incident is likely to spark a major diplomatic row between the UK and Iran, given it's almost unheard of to arrest a country's highest diplomatic official.

In the first major protests since the Jan.2 US assassination of IRGC Quds Force chief Qasem Soleimani, angry student-led demonstrations broke out in front of Tehran's Amir Kabir university demanding that Iran's leaders, including Ayatollah Khamenei step down over their initially concealing the truth about the airline downing.