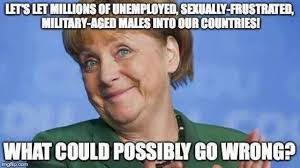 State police ensured that social disorder by incoming Islamists would be tolerated whilst resistance by critics would be considered intolerable.

As a consequence, unknown numbers of German nationals, those whose roots are actually in Germany, have begun an exodus to 'less enlightened' Europe.

Germany has the highest number of nationals living in OECD nations (advanced economies). The 2015 figure was 3.4 million. It is certainly a million or so higher as we slip into 2020.

For comparison, picture the entire population of Berlin opting out of Merkel's multi-racial religious goulash spiced up with ethnic-diversity.

Frying pan to fire comes to mind when one considers that 1.1 million opted for the U.S. However, an estimated 500,000 Germans moved have to elsewhere in Europe, with many settling in Spain and Portugal. The latter is much less tolerant of intolerable guests than is the Merkel regime.