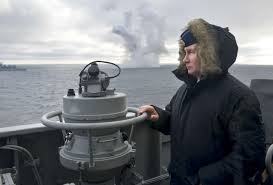 Russian President Vladimir Putin observed a war drill off the coast of Crimea on Thursday that included the launching of hypersonic missiles, the Russian Defense Ministry said.

Various missiles were fired during the drill, including Kalibr cruise missiles and Kinzhal hypersonic air-launched missiles.

More than 30 warships, including the Admiral Grigorovich and Admiral Makarov frigate, one submarine, and more than 40 aircraft, including Tu-95MS strategic bombers, Su-30SM fighters, and Su-24M bombers, participated in the drill.

Putin observed much of the exercise aboard the Marshal Ustinov missile cruiser.

"The drills have been held successfully," Admiral Nikolai Yevmenov, commander-in-chief of the Russian Navy, told Putin on Thursday.

The Russian Prime Minister Resigns And No One Knows Why