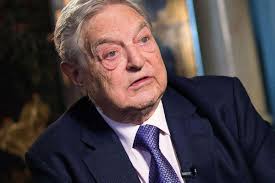 Thanks to George Soros, Larry Krasner was elected District Attorney in Philadelphia.

Krasner initially charged White with first-degree murder and denied his request for bail. But under pressure from leaders in Philadelphia's African-American community, Mr. Krasner downgraded the charge to third-degree murder. Then, days before the trial, Mr. Krasner dropped the murder charge entirely.

White was then acquitted. How's that for justice?

Mr. Krasner is one of a new crop of "progressive prosecutors" who have won election in liberal cities. They include San Francisco's Chesa Boudin, who was raised by Weather Underground radicals Bill Ayers and Bernardine Dohrn because his own parents were in prison for participating in the murder of police officers. Mr. Krasner was a virulent critic of law enforcement before running to become the city's top prosecutor. During a 30-year career as a defense lawyer, Mr. Krasner gained notoriety for filing 75 lawsuits against Philadelphia police. In a 2017 campaign video he said "policing and prosecution are both systematically racist," and he called poverty and crime consequences of "mass incarceration."