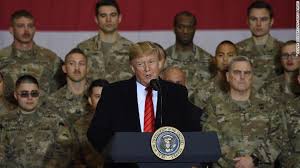 "Saudi Arabia is paying us for [our troops]. We have a very good relationship with Saudi Arabia," Trump said. "I said, listen, you're a very rich country. You want more troops? I'm going to send them to you, but you've got to pay us. They're paying us. They've already deposited $1 billion in the bank."

Following the Sept.14 Aramco facility attacks, which the US blamed on Iran, the US has sent up to 3,000 troops to Saudi Arabia, with likely more to follow after Iran has vowed to continue avenging the death of Qasem Soleimani.

It's unclear in what capacity or with what intent the Saudis may have "deposited $1 billion in the bank" according to Trump's claim. And then there's the question of what bank and under what authorization this supposed exchange happened.

In the same interview Trump went on to describe a similar quid pro quo scenario in play with US troops stationed in South Korea.

While your Enemies Destroy Themselves.

The War In Trump's Ear by Ron Paul