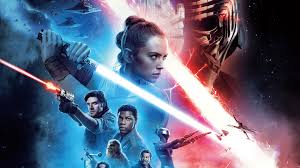 "The Force Awakens" finished its theatrical run with $2 billion worldwide. That was an enormous hit.

But the next chapter, "The Last Jedi," ended up with $1.3 billion, a significant fall off.

"Skywalker" shows "Star Wars" fatigue. It's not quite at $1 billion, and it's getting ready to say goodbye. Disney will keep it in movie theaters for a while but the big push is over.

In the US, "Skywalker" has earned just half of what "The  Force Awakens" raked in. Of course, maybe a lot of fans are waiting for the streaming and the DVD, with inevitable extras.

Now the studio is threatening us with a new "Star Wars" movie in 2022. Yes, just two years from now. We can only hope they will reconsider and wait longer. You can't miss something that's never gone.  It's time to give "Star Wars" a rest until they have a great– I mean a GREAT — idea, not just more young people wandering around the universe with the inevitable cameos from the other movies. Let some nostalgia sink in first.

Inside the odyssey: taking a closer look at Stanley Kubrick's 2001