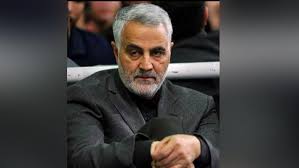 Yet on January 2 2020 Trump made a much bigger mistake: He launched all-out war with Iran—a war that will be joined by millions of anti-US non-Iranians, including Iraqis—by murdering Gen. Qassem Soleimani, the legendary hero who defeated ISIS, alongside the popular Iraqi commander Abu Mahdi al-Muhandis. Gen. Soleimani was by far the most popular figure in Iran, where he polled over 80% popularity, and throughout much of the Middle East. He was also adored by millions even outside that region, non-Muslims as well as Muslims. Many Christians throughout the world loved Gen. Soleimani, whose campaign against ISIS saved the lives of thousands of their co-religionists. Even Sunni Muslims (the people, not the billionaire playboy sheikhs) generally loved and admired the Shia Muslim Gen. Soleimani, a saintly warrior-monk who was uncommonly spiritual, morally impeccable, and the most accomplished military genius of this young century.

The strategic stupidity of Trump's order to murder Soleimani cannot be exaggerated. This shocking, dastardly murder, committed while Soleimani was on an American-encouraged peace mission, has unleashed a "Pearl Harbor effect" that will galvanize not just the nation of Iran, but other forces in the region and around the world. Just as the shock effect of Pearl Harbor helped the American war party overcome domestic political divisions and unite the nation in its resolve for vengeance, so has the Soleimani murder galvanized regional groups, led by Islamic Iran and Iraq, in their dedication to obliterate every last trace of any US-Israeli presence in the region, no matter how long it takes, by any means necessary.

1 Comments in Response to Trump's Killing of Soleimani: New "Worst Mistake in US History"

So, we killed a guy who was responsible for a lot of deaths; for some reason I see that as a positive. If nothing else is there any doubt at all he would be responsible for even more deaths in the future if allowed to go on?