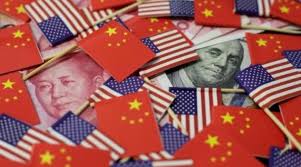 China is preparing to buy $50 billion more in energy products and increase purchases of U.S. services by $35 billion over the next several years, a source told Reuters.

Meanwhile, China will increase purchases of U.S. farm goods by $32 billion over 24 months, or by about $16 billion per year. When added to the $24 billion export baseline pre-trade war in 2017, the new total is around $40 billion in annual agricultural purchases.

President Trump will sign the Phase 1 agreement with Chinese Vice Premier Liu He, as President Xi Jinping opted not to attend the signing event.

U.S. Trade Representative Robert Lighthizer, on Monday, said the Phase 1 agreement is a "huge step forward" for US-China relations and "a really, really good deal for the United States."

"We expect them to live up to the letter of the law. We'll bring cases, we'll bring actions against them if they don't," Lighthizer said.

However, analysts and traders who spoke with Reuters had doubts that China could boost agricultural, auto, and energy purchases to such levels.