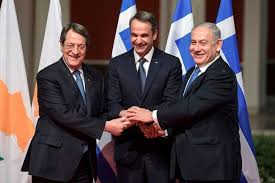 The deal comes amid increasing tensions with Turkey as Ankara seeks to expand its claims over gas-rich areas of the Mediterranean Sea.

The 6-billion-euro ($6.6 billion) project envisages the construction of a 1,900-kilometer (1,180-mile) undersea pipeline that would carry up to 20 billion cubic meters of gas a year from Israeli and Cypriot waters to Crete and then on to the Greek mainland. From there, the gas would be transported to Italy and other countries in southeastern Europe.

Israel, Greece and Cyprus hope to reach a final investment decision by 2022 and have the pipeline completed by 2025. The EastMed project, which would bypass Turkey, could eventually supply up to 10% of Europe's natural gas needs.

The signing of the EastMed pipeline project came a month after Turkey and Libya reached a bilateral agreement on maritime boundaries in the southeastern Mediterranean Sea. The deal, signed on November 27 by Turkish President Recep Tayyip Erdo?an and the UN-backed leader of Libya, Fayez al Sarraj, attempts to redraw existing sea boundaries so that Libya ostensibly can claim exclusive rights over 39,000 square meters of maritime waters that belong to Greece.