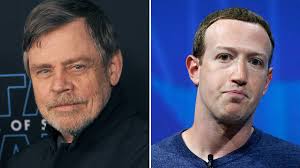 While not stated specifically, Hamill is likely referring to the company's hands-off approach to fact-checking politicians' comments and its refusal to put an outright ban on political advertising.

Hamill, who played Luke Skywalker in 'Star Wars', made the announcement to his 3.6 million followers on Twitter, and his post has since been retweeted over 20,000 times.

He wrote: 'So disappointed that #MarkZuckerberg values profit more than truthfulness that I've decided to delete my Facebook account.

'I know this is a big 'Who Cares?' for the world at large, but I'll sleep better at night. #PatriotismOverProfits.'

Hamill's post triggered a flood of replies, with many lauding his decision to use his celebrity platform to make a statement about honesty in politics.

Trolls can be hunted down and rooted out. So why aren't social media giants doing it?