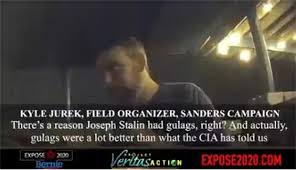 A few clips released by PV shows a Bernie Sanders campaign operative, Kyle Jurek, actually stating a few ludicrous things. Firstly that Stalin and his gulags weren't actually all that bad, and that at least in gulags you got paid a living wage. According to Jurek, the CIA has been lying to us about how bad these gulags were for ages.

Moreover, you'll never guess who he wants to send to gulags.

According to Jurek, billionaires and Trump supporters should be sent there because it will break you of the "privilege" you have.

Never mind that Trump supporters run the gambit from being men, women, black people, Hispanic people, rich, poor, gay, and everything in between. If you're rich or support the president, you need to be sent to the gulags.

It doesn't stop there, however.

Campaigns warn of chaos ahead of Nevada caucuses