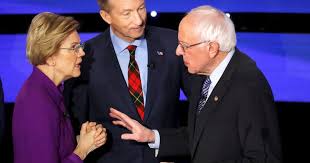 Following the conclusion of the event, Sanders went to shake Warren's hand, but she clenched her fist and engaged in a terse conversation with the socialist Senator. Bernie then pointed at Warren and held his hands up.

Earlier in the debate, Sanders was asked about Warren's claim that he told her in 2018 that a woman could never win the presidency.

Despite Sanders denying the accusation and referencing decades old footage where he had said the opposite, the CNN host immediately asked Sanders, "What did you think when Senator Sanders told you a woman could not win the election?"

Warren then played the identity politics card by asserting that the only people on the stage who had not lost elections were the women.

She then claimed she was the only person on the stage to have "beaten an incumbent Republican any time in the past 30 years."

Campaigns warn of chaos ahead of Nevada caucuses