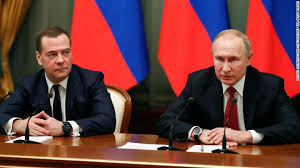 This morning President Vladimir Putin held his yearly speech to the Federal Assembly of Russia (English transcript). Putin spoke about Russia's demographic situation, its weaponry and the celebration of the upcoming 75th anniversary of its second world war victory.

But the most important part was about constitutional changes. A summary via TASS:

Putin has suggested a putting up a package of constitutional amendments for a plebiscite. At the same time, the Russian president stated that he sees no grounds to adopt new constitution in Russia.
Putin also suggest stipulating the supremacy of the Russian Constitution over international norms in Russia.

"The time has come to make some changes to the nation's fundamental law that would directly guarantee the priority of the Russian Constitution in our legal space. What does this mean? It means that requirements of international law and decisions of international bodies can only be enforced in Russia to such an extent that does not violate human and civil rights and freedoms and does not violate our Constitution," Putin emphasized.

It seems that the European Court of Human Rights has pissed off Russia once too often. The court is associated with the Council of Europe which has 47 member states including Russia. It has several times judged in the favor of renegade oligarchs in exile and the 'western' supported wannabe opposition in Russia.

Putin then proposed additional changes to the constitution. These were probably the points that led to Medvedev resignation:

Putin agrees that the same person should not hold the post of the head of state for more than two consecutive terms.