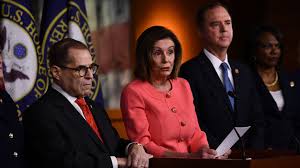 House Speaker Nancy Pelosi announced seven impeachment managers Wednesday morning in advance of a House vote that will move the articles onto the Senate for a trial of President Trump.

Pelosi made official that House Intelligence Chairman Adam Schiff would lead the effort, along with Judiciary Committee Chairman Nadler.

In the House, Schiff and Nadler's committees handled impeachment, which Pelosi called Wednesday, 'an impeachment that would last forever.'

The speaker also named the No. 5 Democrat in the House, Rep. Hakeem Jeffries, as a manager. Jeffries is a member of the Judiciary Committee.  As are Reps. Zoe Lofgren, Val Demings and Sylvia Garcia, named Wednesday by the speaker. She also picked Rep. Jason Crow, a Colorado Democrat, who served in both Iraq and Afghanistan.

The managers will deliver the two articles of impeachment – abuse of power and obstruction of Congress – to Senate Majority Leader Mitch McConnell on Wednesday.