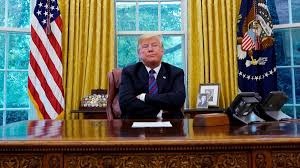 "What we want all countries to join in," said State Department Spokesperson Morgan Ortagus in a recent Fox News interview, "is to help us not only to de-escalate any tensions with Iran, but to help us bring Iran to a place where they are ready to stop their terrorist and malign behavior, and where they are ready to discuss with the United States, with Europe, with everyone, about how they can change their behavior to act like a normal nation."

"We want Iran to simply behave like a normal nation," Secretary of State Mike Pompeo said in a press statement the other day. "We believe that the sanctions we imposed today further that strategic objective."

These would be the additional sanctions which have been expanded to include virtually the entire Iranian economy, deliberately targeting Iran's already sanction-starved populace, with the explicit goal of fomenting a civil war in that nation.