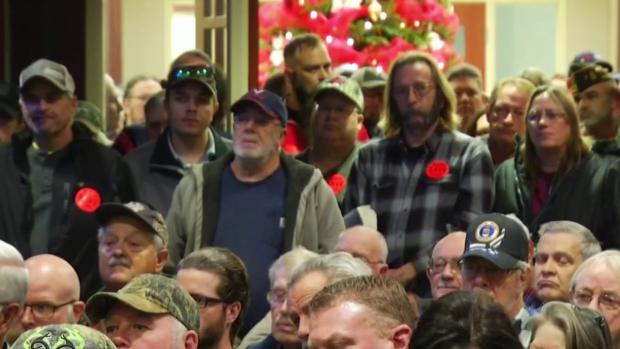 The drama in Virginia has escalated again as Governor Ralph Northam declares an official State of Emergency before January 20th's "Lobby Day" protests.

Citing violence that erupted in Charlottesville during a Unite the Right rally in 2017, Northam said that there are credible threats that "armed militia groups plan to storm the Capitol" during Monday's rally. In an executive order,  he announced he is banning all weapons from Capitol Square for the day.

Credible intelligence gathered by Virginia's law enforcement agencies indicates that tens of thousands of advocates plan to converge on Capitol Square for events culminating on January 20, 2020. Available information suggests that a substantial number of these demonstrators are expected to come from outside the Commonwealth, may be armed, and have as their purpose not peaceful assembly but violence, rioting, and insurrection. Assuring that Virginia's Capitol Square and surrounding public areas are sheltered safe places for those who come to participate in the democratic process, as well as those who work on or near Capitol Square, is my greatest priority.

The anticipated effects of the potential convergence of tens of thousands of demonstrators on Capitol Square, some of whom may not come to assemble peacefully, constitutes an emergency as described in § 44-146.16 of the Code of Virginia (Code).

Therefore, by virtue of the authority vested in me by the Constitution of Virginia, by §§ 2.2-103 and 44-146.13 et seq. of the Code, as Governor and Director of Emergency Management and Commander-in-Chief of the Commonwealth's armed forces, I proclaim that a state of emergency will exist starting on January 17, 2020 through January 21,
2020. Accordingly, I direct state and local governments to render appropriate assistance to prepare for this event, to alleviate any conditions resulting from the situation, and to implement recovery and mitigation operations and activities so as to return impacted areas to pre-event conditions as much as possible. Emergency services shall be conducted in accordance with § 44-146.13 et seq. of the Code. (source)

"No weapons will be allowed on Capitol grounds," said Northam, a Democrat. "Everything from sticks and bats to chains and projectiles…. The list also includes firearms. It makes no sense to ban every other weapon but allow firearms when intelligence shows that armed militia groups plan to storm the Capitol." (source)

The rally had been planned as an open carry event and the turnout is expected to be massive. Monday, the state's congress is expected to vote on a number of incredibly unpopular anti-gun laws, discussed here and here. While one of the most alarming bills has been pulled due to overwhelming opposition, there are plenty more to take its place.

What are these threats?

When you push a population to the brink, threatening them with gun confiscation at the hands of the National Guard and telling them that their lawful actions of rebellion are meaningless, you have to expect that population to push back. Particularly a rural, gun-loving population that makes up most of the counties in Virginia.