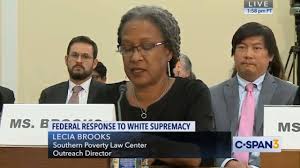 According to reporting by the Springfield News Sun, out of the crowd of 150 or so Brooks marched with and then officially addressed, "many of the protesters had handkerchiefs over their faces, and several were armed."

Brooks then identified herself with and lauded the hammer-and-sickle waving, assault rifle wielding mob, who held signs calling for violence: "We turned them back at Stone Mountain, and we can turn them back at every turn. We just have to show up," she proclaimed.

Video of the rally leaves no room for plausible deniability about the nature of the militants. None of the groups at this rally were made up of MSNBC liberals or normal Democrats. The SPLC officials knowingly marched with people who want to impose communism and anarchism on America by the use of armed violence, and were proud to use them to terrorize their political opponents.