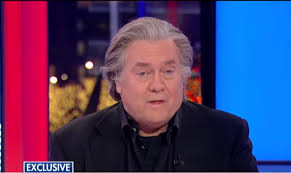 Former White House chief strategist Steve Bannon has called for a full investigation into coordination between Congressional Democrats and members of the media, after articles of impeachment against President Trump appear to have been deliberately 'slow walked' in order to coincide with two 'bombshell' developments in the Ukraine story.

"First off, Rachel Maddow should be a witness of fact now. She should be brought in," replied Bannon - referring to the seemingly coordinated media blitz surrounding Lev Parnas, an indicted former Rudy Goiliani associate whose undated, hand-written notes appear to support the claim that President Trump pressured Ukraine into investigating Joe Biden for corruption.

"We ought to have all the emails and all the text messages between Schiff, between Nancy Pelosi, Phil Griffin at MSNBC News. We ought to bring the whole thing out. How did this get dropped? Why have they been working on this for so long? How did this just come about at the last second? She admitted she's been working on this for months, and the House just got this. The Republicans didn't even see this when the vote when down," said Bannon, adding "This is now a complete farce."

Does the Coronavirus Make the Case for World Government?

Bernie Sanders Is Funded By The Wealthiest Zip Codes In America

What Is The Deep State?

UK Google Data Transfer To US Is Just The Start: "Possibilities For Abuse Are Enormous"